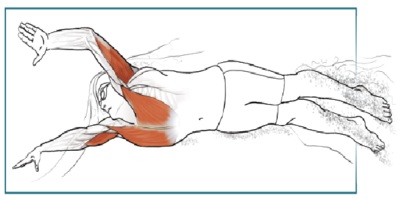 The primary difference between freestyle and butterfly is that the arms move in unison during butterfly whereas reciprocal movements take place with freestyle. Because butterfly and freestyle have the same underwater pull pattern, the muscle recruitment patterns are almost identical. As with freestyle, the swimmer's arms in butterfly are in an elongated position when they initiate the propulsive underwater portion of the stroke. Muscles active during the entire propulsive phase are the pectoralis major and latissimus dorsi, which function as the primary movers , and the wrist flexors, which act to maintain the wrist in a neutral to slightly flexed position. The biceps brachii and brachialis are active as the elbow moves from being fully extended at the initiation of the catch to approximately 40 degrees of flexion during the midpart of the pull. Unlike in freestyle, a forceful extension of the elbow is emphasized during the final portion of the pull, resulting in greater demands being placed on the triceps brachii. As in the freestyle stroke, both the rotator cuff and deltoid are responsible for moving the arm during the recovery phase, but the mechanics are somewhat different. Butterfly lacks the body roll that aids the recovery process during freestyle; instead, an undulating movement of the torso occurs, which brings the entire upper torso out of the water to aid in the recovery process.

Again, the shoulder blade stabilizing muscles are extremely important, because they function to provide a firm anchor point for the propulsive forces generated by the arms and help reposition the arms during the recovery phase of the stroke. Although butterfly lacks the body roll present in freestyle, the core stabilizers are still important in linking the movements of the upper and lower extremities and have an important role in creating the undulating motion that allows the swimmer to get the upper torso and arms out of the water during the recovery process. The undulating movement is initiated with contraction of the paraspinal muscles that run in multiple groups from the lower portion of the back to the base of the skull. This contraction results in an arching of the back, at which time the arms are moving through the recovery process. Contraction of the abdominal muscles quickly follows, which prepares the upper body to follow the entry of the hands into the water to initiate the propulsive phase of the stroke.

As with the arms, the muscles used in generating the kicking movements during the butterfly kick are identical to those used during the freestyle kick; the only difference in kick mechanics is that the legs move in unison. The propulsive downbeat begins with contraction of the iliopsoas and rectus femoris, acting as hip flexors. The rectus femoris also initiates knee extension, and associated firing of the quadriceps muscle group further aids in extension of the knee. The gluteal muscle group drives the recovery phase of the kick. Concomitant contraction of the hamstring muscles also works to extend the hip. The foot is maintained in a plantarflexed position through a combination of the resistance from the water and activation of the gastrocnemius and soleus, acting as plantarflexors. The dolphin kick that is used at the start of the race and off each turn wall recruits a larger group of muscles than the smaller, more isolated kick tied into the arm movements. Besides the movements generated at the hips and knee, the dolphin kick ties in the undulating movements of the torso through activation of the core stabilizers and the paraspinal musculature. 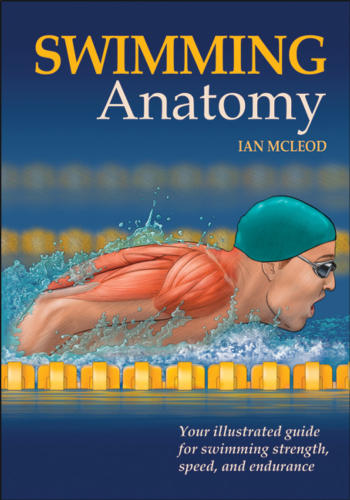